Unity Based on Justice 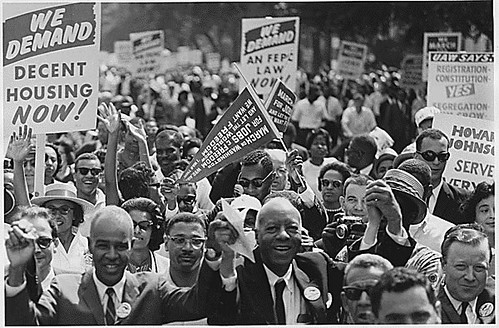 In July of 2020, UU Class Conversations published the blog post The Time to Unite as One America is Now about police brutality and the systemic oppression of Black and other people of color throughout the United States. It focused on how the deaths of black and brown men and women by police officers sparked international protests. The protesters were labelled terrorists, thugs and unpatriotic by some conservative media outlets and politicians.

Just a few weeks earlier, some of the same media outlets and politicians had proffered a very different response when heavily armed, mostly White, protesters stormed the Michigan capitol building, threatening to kidnap and possibly kill the governor. Why? The rioters were upset about stay-at-home orders during a pandemic.

These protesters were called patriots. Police stood down, the National Guard was not called in to quell the unrest, and there were no arrests, no tear gas deployed, and no curfews imposed and enforced. Both times Americans were exercising their First Amendment rights. Yet, there were very different outcomes and consequences for those protesting.

Down a Dangerous Road

Well, fast-forward less than six months later and due to a steady stream of falsehoods and conspiracy theories from politicians, including the lame duck U.S. president about the legitimacy of the presidential election, a mob of armed white supremacists were incited to attempt an insurrection of another American Capital building. The intent was the same: Harm the legislature, including the vice president, speaker of the House and members of the House and the Senate. This time, the riot was deadly and dozens of police officers were injured and six people have died: All this in America.

Why? Well, the idea that real Americans can only look a certain way and cannot be immigrants or people of color or a different religion. Many Americans overwhelmingly ignore the fact that class inequalities are not just part of the black or brown experience but a struggle for all Americans who are low-income or working class. This is increasingly true also for middle class people. This ingrained belief keeps many lacking class privilege from joining others of a different race or religion and undercuts any potential unity across racial lines.

There is little self-reflection for most Americans on how their class differences shape their backgrounds and unique attitudes and behaviors. Few consider how these class differences actually can bridge racial and religious divides, if explored. The class designation is overshadowed by the ever-present racial divide. So much so that economic initiatives often proposed by progressive or moderate politicians are viewed as handouts or bailouts by certain Americans. Stimulus checks, for example, are considered nonessential because they would go to the undeserving.

The idea that those with less class advantage are lazy is often intentionally conflated as coded messages about immigrants and people of color and creates an us versus them paradigm. Imagine, if people living in poverty and those in the working and middle class actually recognized that their commonalities outweigh their differences?

Some White poor and working class people continue to believe that they have more in common with others of their race who have substantial class privilege than they do with black and brown people of limited privilege. They have bought the idea that the We (Whites of all classes) have to stick together to protect our country, our flag, our families and our country’s traditions as Whites – despite economic differences. It’s imperative, or the them will take over, and as the neo-Nazi chant in Charlottesville suggested, they will erase us.

The idea that the votes of people of color are less legitimate than those of Whites is a shameful part of American history that is still alive and why insurrectionists carried Confederate flags through the Capital buildings during both riots.

With the current (and much-needed) focus on racial differences, Americans overwhelmingly are unable to recognize class and classism. Moreover, American economic and political systems that widen the income gap are rarely challenged in substantive ways. The status quo is the gold standard, and U.S. policies and practices routinely benefit the wealthy and affluent at the expense of other Americans.

Until we as a nation wake up and realize that the status quo is not working for most Americans, we are destined to routinely make the same choices that continue to divide us. And, if the latest insurrections teach us anything, there is a growing angry and violent group of Americans who, if not addressed, are intent on ripping the country apart.

But there is much cause for hope in the coming months. The end of the coronavirus – while still distant – is finally in sight. The fervor of the racial justice movement is still high. New federal leadership has said it is committed to addressing class inequities and white supremacy. So, in our UU congregations and organizations let’s heighten the meaningful dialogue – and act upon – racial and class justice.