Home » uncategorized » The Time to Unite as One America Is Now

The Time to Unite as One America Is Now 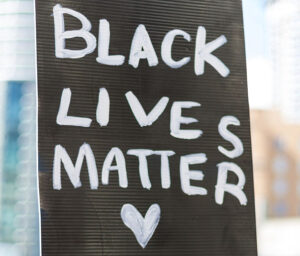 Nearly a century ago, white supremacists attacked the Greenwood District in Tulsa Oklahoma for 18 hours, resulting in more than 800 people being admitted to hospitals, 6,000 black residents interned at large facilities and many innocents murdered.

Greenwood in 1921 was known as the Black Wall Street full of successful Black-owned businesses and entertainment spots. The police did not intervene as the town was decimated, people were murdered and the survivors callously displaced.

More recently, one in a long string of American Black men was killed in police custody. The video of the atrocity showed the same abject callousness of the officers as one of them asphyxiated him and the others watched.

His murder has sparked protests nationwide. People from all over the United States – and now the world – are protesting American police brutality and systemic oppression of Black and other people of color throughout the United States.

Justice or Just Us?

While most are peaceful, the protesters have been labeled rioters, thugs and looters without much evidence other than the color of their skin by some media outlets and politicians.

What is so striking about this is the juxtaposition of the comments made by some of the same media outlets and politicians a few weeks earlier when heavily armed, mostly White protesters stormed an American capital building threatening the governor because they were upset about stay-at-home orders during a pandemic. At that time, these protesters were called patriots, and police stood down. No arrests, no tear gas deployed, no curfews, etc. Same America, same protests, yet very different outcomes. Why?

Well, a time-tested political strategy used in America purposefully inflames racial stereotypes to elicit strong actions and reactions. It pointedly exploits these stereotypes while being just vague enough so the perpetrator can feign he/she had no racist intent. Referring to a city as rat-infested or immigration from a certain group as an infestation or peaceful protesters as thugs are recent examples.

What makes this practice insidious is the fact that the U.S. economic inequalities are not just part of the black or brown experience but a struggle for all Americans in the working-class. This strategy keeps many in the working and middle class disjointed and undercuts the potential unity across racial lines. Economic initiatives often proposed by progressives or moderates are viewed as handouts or bailouts by the American majority and are often rejected despite their potential to help the poor and working-class.

The idea that hard-working Americans can only look a certain way and cannot be immigrants or women or people of color or a different religion gained traction in the late 1960s with President Nixon’s southern strategy. Cue the fanning of racial tensions whenever and whoever points out that the top 1% in the United States are steadily consolidating the country’s wealth by manipulating many political, educational and religious institutions.

Toni Morrison rightly claimed that the Civil Rights Movement magnified class differences within the American landscape. This sentiment was echoed by Dr. Martin Luther King’s awareness that the working-class is caught in “an inescapable network of mutuality tied in a single garment of destiny.” But coded messages about immigrants, LGTBQ+ individuals and racial/ethnic minorities and all kinds of religious intolerance create an us versus them paradigm.

Some White working-class people have been duped by this message of inclusiveness and fealty to “the race” by those with substantial class privilege. They have bought the idea that the We (Whites of all classes) have to stick together to protect our country, our flag, our women and children, and our country’s traditions as Whites – despite economic differences. It’s an imperative, or the them will take over and erase us.

The truth – known by most UUs in the working-class – is that the working-class, along with those with even less class advantage, has always been multiracial, multiethnic and multilingual. Don’t all Americans want jobs with fair wages, health care, education for their children and to be a part of the American dream?

Groups across race, religion and class are starting to unify when they find common causes like gun reform, ending police brutality, healthcare as a human right and fighting against class inequity. UU Class Conversations is more committed than ever to help UUs identify their assumptions about their class differences and build upon the unique strengths gained from their class background. We are committed also to help you start the difficult and uncomfortable but necessary conversations that help people make connections that lead to awareness – which is integral in any transformational process.

Let’s talk about – and act upon – racial and class justice.

← Beyond “Time, Talent and Treasure” Class and Race →